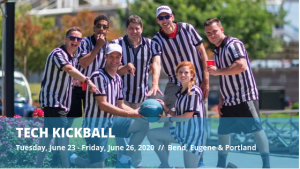 Get out of the office and on the kickball field for fun, friendly competition, and networking at the Tech Kickball – Southern Willamette Valley hosted by Technology Association of Oregon.

Registered teams will play head to head on Wednesday, June 24th from Noon – 4:00 pm to determine kickball supremacy for 2020.

80 teams will play in four Round Robin tournaments hosted throughout Oregon the week of June 23 – 26, 2020. Two teams from each regional competition will advance to the Elite 8 Tournament to be hosted in Portland-Metro in August 2020.

As part of team registration, all players will be invited to join the Elite 8 teams at the celebration in Portland, take a team photo on the field, and network with other industry members. Team registration also includes food, drinks and tournament t-shirts for up to 12 players.

All teams will be placed into one of four divisions. Teams will participate in round-robin play, where each team will play two teams in their division.

Results from round-robin play will determine top seeds in each division for the second half of the tournament. If there is a tie, runs scored against the team will be counted. The top-seeded teams from each division will move on to the Elite 8 Championship Tournament.